Hello girlfriends, and welcome to the best club in the entire world:

This club is for girls who swoon over a hott guy day in and day out, and are TOTALLY a-tune to the faux-pas-nouveau!! If you don't do both, or either of these things, you can't be in this club! However, if you are both of these things, you can contact either Mariah (Verde) Windcrest, or Roxy at their emails, which are posted on their totally hip, cool webpages! New info will be posted every year week, so come in and check out the cool, new things happening in THE HIP GIRL CLUB! 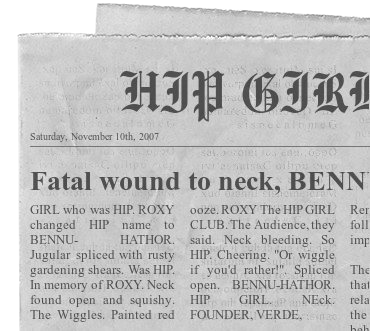 We have fantastic neeeewwwws, GIRLyfriends!! IT'S THE 10 YEAR ANNIVERSARY OF NOT UPDATING THE HIP GIRL CLUB HOMEPAGE!!!

It's a big day for every girl who IS a girl at the HIP GIRL CLUB! If this homepage had been updated any sooner, we wouldn't have this fetid festivity to look forward to!

Even though this seems like it was done (or rather, not done) out of negligence, for years and years, HIP GIRL FOUNDER, VERDE actually had every opportunity to update the information and news section. But instead, her interests were not in updating the homepage, but in NOT updating the homepage. At least every other day, she had looked back on the club with the strongest urge to frequently check the website without touching the source code.

Let's check in with her now:


VERDE: "It became an obsession, gulfriend. I had the pleasure of memorizing every letter and open bracket in pufect order. Like... every word was not a word, but a string of letters with spaces in order. From the beginning, 'open bracket sign, h, t, m, l, closed bracket sign.' I could recite each letter and symbol from start to finish--fast a' slow!

"But, what about your obsession with Lucas Friend Nesbit II?"

VERDE: "It was important that I also made sure that I also made time for boyfriend, too. I would look at his image and the flesh on his face and watch the little hairs grow out of the wrinkle on his sweet ass chin while his sideburns curled up and irritated the blood vessels in his eyeballs, but then I found something out...

"What was that, VERDE?

VERDE: "I found out that boyfriend's image could be converted into a webpage text. I also had the time to memorize each individual letter in the text, too. I knew that he was in it. I already updated his obsession page! It looks so good!

"Uhh, we actually have a question for you, Verde. About y'know, the elephant in the room..."

VERDE: "I have no idea what you mean about elephants, girlyfriend. There are only text and images."

"No, no, it's about the article at the top of the page that's unexplained, girlyfriend! I know what it's all about, but don't you think that you'd like to let all of our HIP GIRL MEMBERS and readers know what on HIP earth happened to her? Where is HIP GIRL FOUNDER, ROXY's corpse now?"

VERDE: "There is no corpse, siwwy! She's always been here. She's right here next to me."

"Verde... that image link is broken."

VERDE: "No it isn't, friend! That's a picture of me holding a picture of WOXY while looking at a picture of me! But it's an alive picture, so that's why it can't show it on the homepage. I love my fwiend WOXY! She talks back to me, tells me I'm worthless, and tells me that we need to pay the water bill by today to avoid a $15 late fee!"

"Verde,... Verde.... That picture doesn't exist, and neither does HIP GIRL FOUNDER, ROXY."

ROXY: "Wrrrraaaaa, what do you mean that I don't exist?! You can hear me, so don't insult me, you insolent narrator!"

"Verde, that's just you talking through a character in your head that you're deluded to believe is real."

ROXY: "MMmyaaaahhh, shut up, stupid Verde. I can take care of myself!"

VERDE: "No I haven't, GIRLyfriend! You can't lose a HIP mind, because we never had brains to begin with!"

ROXY: "You can say that again!"

"No, you've lost your HIP mind! You're becoming not as HIP as you used to be! You're... not HIP anymore."

VERDE: "Now that's just going a stick too far! I don't want to hear from you anymore, GIRLyfriend. I don't even know who you are, anyway! You're not even a HIP GIRL..."

"Yes, I am! I have been here all this time. Don't you recognize me? I'm the Narrator! I have always been here!"

Well, that was awkward! It's Verde here, my pumice pals, and there will be no more narrator no more, because I don't know who that is, right, WOXY?

WOXY: "Narrator? What kind of stupid stuff are you even talking about? Myeeeh, let's get this update over with, Verde!"

Oh, WOXY, you my best fwiend! Don't wowwy, I won't let anyone possess me like that ever again!

Anyway, in other news, It looks like there are no more HIP GIRL MEMBERS left except for me, WOXY, and Melissa, I guess. She's just my groupie, though! It's so nice to have HIP GIRL fans! Teehee!

My smassy tard boyfriend is diffewent, too, but I like WOCKY better this way! He's freezes into shitty poses with his hands and likes to 'xamine my brain when he cut open my skull and poked it for science! That why I painted that picture of WOXY with all the blood around her! She not weely dead at all, ah yew, WOXYfriend?!

Anyway, I'm so bored, so here's a short speech from HIP GIRL FOUNDER, VERDE! And I have some words of wisdom!

"We are HIP. We are never NOT HIP, even if there's nothing left! We are obsessed and we never forgive, so don't fucking cross us girlyfriend!"

That's what VERDE said! Bye bye for now, pimples! We will be back in another 10 years! I bet you will like to see us then! 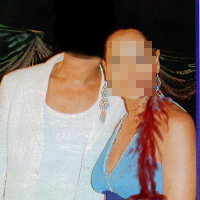 (Missed past events? Click here to see what was hip!)

Mariah and Roxy are the two cuties that founded this awesome club! Click on a spokesgirl to find out more information about her!

These are the members of the HIP GIRL CLUB. The ones who have joined are the ones listed. Thanks for joining, GIRLS!

These are the hott guys that the founders and members of this club obsess over. Only one girl that likes one certain guy is able to join, due to the multiple obsession over one guy can cause feuds amongst us girls.

This list specifies all the women banned from this club. Some women are banned for a specified time, and some women are never allowed in. The link for the Banned List is below. Be good, girls.

This club will allow any girl from around the world in except the girls/kinds of girls that follow:


Please remember that only ladies can join the HIP GIRL CLUB. Also take note that HIP GIRL enemies are never allowed in. Thank you

Here is the link to the best of our very own HIP GIRLS! The HIP GIRL Juke box! Party all night to these awesome jams!

Here is a list of links for those HIP GIRLS who want to explore even more prisiness on the web! Check out these girly links for even more HIPness! (note to users: You must be on the internet to view these webpages.)

PAST INFORMATIONS AND NEWS

Past events and news from the INFORMATION AND NEWS section above are to be placed here. They go in chronological order from the first post of news created.

The "HIP GIRL CLUB" is a shining gem of a turd and a joke site owned by a chaotic, unknown random named Danielle. As of 2020, it was conceived and written exactly half her life ago. For your health!
© 2004-2020